March 26 | Fascism in the Belly of the Beast 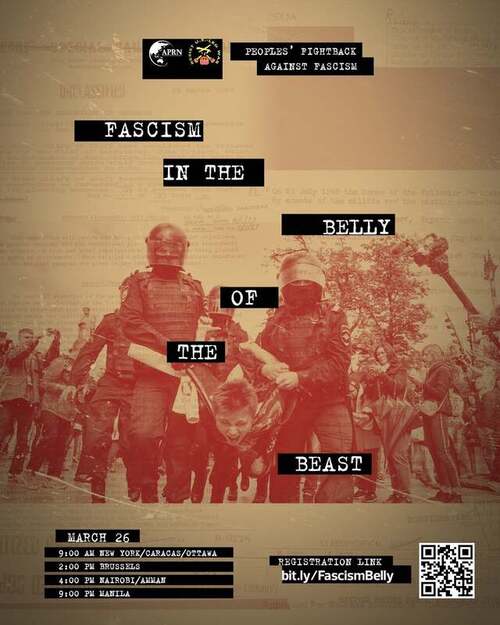 Peoples’ Fightback Against Fascism in coordination with Resist US-Led War Movement and Asia Pacific Research Network - APRN present the webinar:
Fascism in the Belly of the Beast

We will tackle head-on the manifestations of fascism in imperialist countries. Imperialism expands its territory by creating fascism abroad, but inherently leads to fascism at home in times of crisis.

Speakers:
Said Bouamama, on fascist repression against migrants in Europe

Omar Flores, Milwaukee Alliance Against Racist and Political Repression, on police repression as an expression of fascism in the USA

September 26  |  Women against wars of aggression 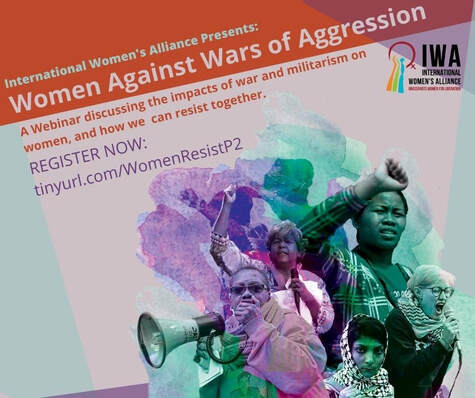 Learn about the impacts of imperialist wars of aggression on women and their communities, and the various forms of resistance that continue to inspire women waging anti-imperialist struggles around the world!

​September 10  |  The East Mediterranean: US Bases, NATO & Fossil Imperialism   OUT! 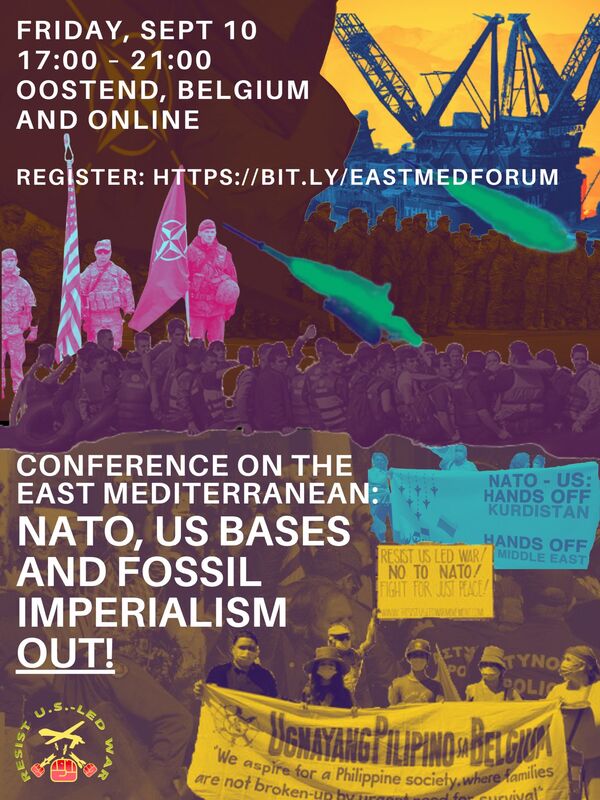 Today, the Eastern Mediterranean has become even more contentious, as the discovery of natural resources has fueled fossil imperialism and inflamed tensions among states in the region.This tension is used by the United States to justify increasing its military presence in the region, including a significant increase in U.S. military bases and cooperation agreements with allied countries. The U.S. even exploits the tension between Greece and Turkey, two NATO member countries, and increases its military presence in Greece. Cyprus, the small island state in the middle of the Eastern Mediterranean conflict, is home to five NATO armies today.

Join anti-war, environmental justice, and anti-imperialist activists to discuss U.S. and NATO militarization and bases in the region; the connection of militarization to rampant resource extraction and fossil imperialism; and organizing strategies to resist U.S.-NATO war-making and plunder of resources. 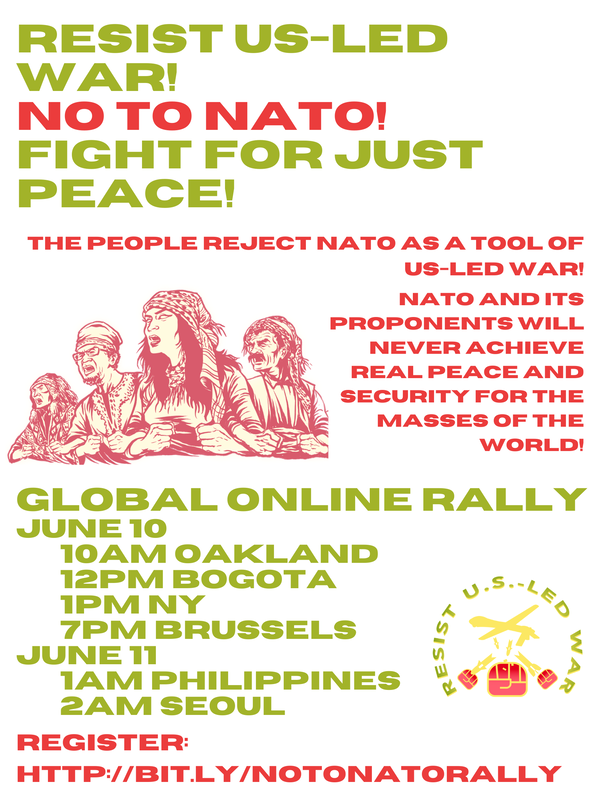 Since its founding in 1949, NATO has acted as an armed wing of US-led war and imperialism, mobilizing its 29 member states in North America and Europe to unleash lethal military campaigns in the name of “collective defence, crisis management and cooperative security.” That is, in defense of the interests of US imperialism and its allies, threatened by its rivals or movements for genuine sovereignty and independence.

The truth is that NATO has been a prime actor in wars of aggression, the enforcement of sanctions, and military occupations that have caused the deaths of hundreds of thousands of people in countries from Afghanistan, to Iraq, and Libya. As part of its policy to surround and contain Russia, NATO has built up its presence in the Black Sea and Mediterranean including US bases and use of bases in Greece and Cyprus. NATO continues to destabilize sovereign countries and prop up fascist governments across Europe, including in Poland, Ukraine, Turkey and Hungary.  NATO gives unwavering support to Israel’s genocidal occupation of Palestine, and NATO member Turkey has initiated military aggression  in  North and East Syria and in South Kurdistan (Northern Iraq) in a brutal war to eliminate the Kurdish people, toward the goal of strengthening NATO in the Middle East. So-called humanitarian missions conducted by NATO place humanitarian aid in a military framework that prioritizes making regions secure for investment and geopolitical interests of its member states.  Around the world, NATO states maintain an intricate network of military bases and military installations, which violate national sovereignty and cause environmental damage and social disruption.

To support its insatiable hunger for militarism, NATO continues to demand larger military budgets and greater military spending from each of its member states, leaving much-needed social services for working people chronically underfunded.  NATO pushes the bogus line of nuclear deterrence, essentially supporting the nuclear build up of its nuclear-armed members and even preventing its members from signing the TPNW (Treaty on the Prohibition of Nuclear Weapons).

Now NATO seeks to launch its new strategic initiative “NATO 2030," which identifies its principal security concerns as not only Russia, but also China, terrorism, cyber attacks and emerging disruptive technologies. This forebodes a dangerous expansion of NATO even further into the Asia Pacific region, as NATO increases its intelligence activities, investment in military readiness--including weapons, military exercises, bases and installations-- and collaboration with repressive regimes in the region.

As the preeminent alliance of the most economically and politically powerful allies of the US, NATO is still the premier force bolstering US-led war today.  Through NATO, the US has access to any military base, domestic or overseas, of any of its members.  The US also is the primary decision-maker when it comes to NATO missions, meaning that all of the pooled resources of member countries are at the US’s fingertips to fund its destructive operations.  Truly, the US would not be at the helm of the majority of wars of aggression today if it were not for the NATO alliance.

The people reject NATO as a tool of US-led war! NATO and its proponents will never achieve real peace and security for the masses of the world. The people can only attain a genuine just peace by organizing for justice and social equity and by forging solidarity amongst peoples, including the recognition of the right to self-determination, economic, and food sovereignty, and self-defense of nations and oppressed peoples from reactionary violence, including US and NATO-led aggression.

Resist US-Led War Movement calls for actions June 10-14, to coincide with the NATO summit in Brussels, to denounce NATO and build the grassroots people’s movement to oppose NATO and US-led war! Join our online rally on June 10 at http://bit.ly/notonatorally, join us at in-person actions in Brussels on June 13, or hold an action in your own city or town!

May 29: NATO-US Hands Off Kurdistan! Hands Off the Middle East! 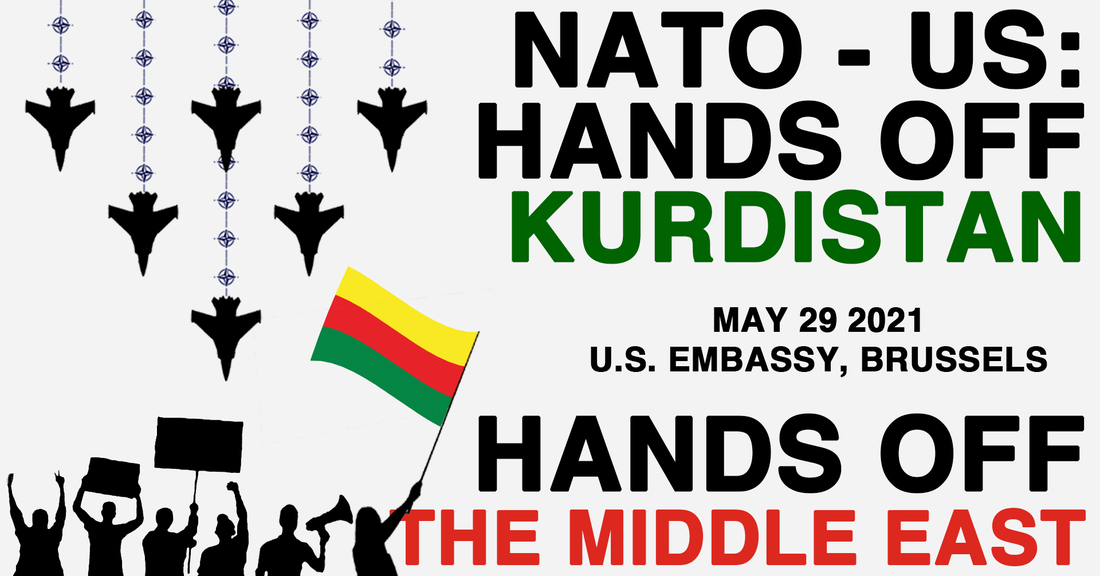 ​Resist US-Led War Movement condemns the latest US and NATO-backed military operations launched by Turkey on April 24, starting a new campaign of annihilation against Kurdistan and the Kurdish people.  Following a long line of Turkish invasions in Syria and Iraq to seize Kurdish lands, the unprovoked Operations “Claw-Lightning” and “Claw-Thunderbolt” now target the Zap, Avashin and Metina areas of South Kurdistan (Northern Iraq) in a calculated effort to advance Turkey’s expansionist policies as well as the US and NATO’s designs for the Middle East. Resist US-Led War Movement stands in solidarity with the Kurdish people in their just struggle of resistance against imperialist aggression and for self-determination.

Turkey is a key member state of NATO, the preeminent alliance of the most economically and politically powerful allies of the US and the premier force bolstering US-led war today. Turkey carries NATO’s program of imperialism not only in name, but in force, as is clearly shown in its aggression toward Kurdistan. Turkey spearheaded US intervention in Syria in order to grab access to Kurdish land that had been won through a campaign of national liberation. Turkey also conducted military invasions of Syria and Iraq to seize Kurdish lands. Turkey was instrumental in propelling the aims of NATO expansion and western imperialism when it invaded and subsequently occupied Cyprus in 1974, and Turkey’s militarism continues expanding in Libya, Yemen and other North African and Middle Eastern countries. Within its proclaimed borders, Turkey inflicts fascist state repression against the Kurdish movement, conducting surveillance, mass arrests, police and military crackdowns, and terror-tagging of Kurdish activists. The Turkish state also enacts a systematic campaign of ethnic erasure of Kurdish history, culture and struggle from the public sphere within Turkey.

With the US’s “pivot to Asia” and NATO’s “NATO 2030” strategic plans to counter the rise of China as a global power, the US and NATO need Turkey to be a militarized buffer between Europe and the West Asia and North Africa region as US troops “pivot” to East Asia. Turkey is also promised at least two multimodal railway and sea ports financed by Chinese capital through the Belt and Road initiative, giving more reason for the US to strengthen ties with Turkey. At the same time, the US is playing tug-of-war with Russia over Turkish influence, as the two superpowers fight over access to Black Sea gas pipelines. All of this adds up to the dogged support of the US and NATO for Turkey’s expansionist maneuvers and assault on the Kurdish people.

The Resist US-Led War Movement condemns this US-NATO war on Kurdistan being waged by Turkey! The people reject NATO as a tool of US-led war! NATO and its proponents will never achieve real peace and security for the masses of the world. The people can only attain a genuine just peace by organizing for justice and social equity and by forging solidarity amongst peoples, including the recognition of the right to self-determination, economic and food sovereignty, and self-defense of nations and oppressed peoples from reactionary violence, including US and NATO-led aggression.

Resist US-Led War Movement calls for actions June 11-14, to coincide with the NATO summit in Brussels, to denounce NATO and build the grassroots people’s movement to oppose NATO and US-led war!

Webinar on April 28th, 2021 at 10am PST/1pm EST/ 7pm CST and Brussels.
REGISTER: tinyurl.com/ResistWarAndNATO
Join the event via Facebook:
https://fb.me/e/1p94gflIF
Join the Resist US-Led War Movement and International League of Peoples' Struggle- Europe for this webinar on NATO, the role it plays in ensuring US military supremacy, and strategies for building the movement to oppose NATO, war and militarism.

As the NATO Summit arrives June 2021, mass movements and organizations will be organizing actions to denounce the atrocities NATO has enacted on the peoples worldwide. Let’s join in solidarity against militarism and authoritarianism and fight for genuine, just peace!

Featured speakers for this first in the two-part webinar series will be:

​Fridays, May 8, 15, 22, 29
Join our educational discussion series to discuss important topics affecting people in the U.S. and across the world and what we can do collectively to create genuine change.

Join us every Friday this month:
May 8th, 7pm-8pm PDT
Revolutionary Women & the History of Mother’s Day: Women’s Organizing

May 22nd, 7pm-8pm PDT
Public Healthcare Not Warfare: the Militarized Pandemic in El Salvador and the Philippines